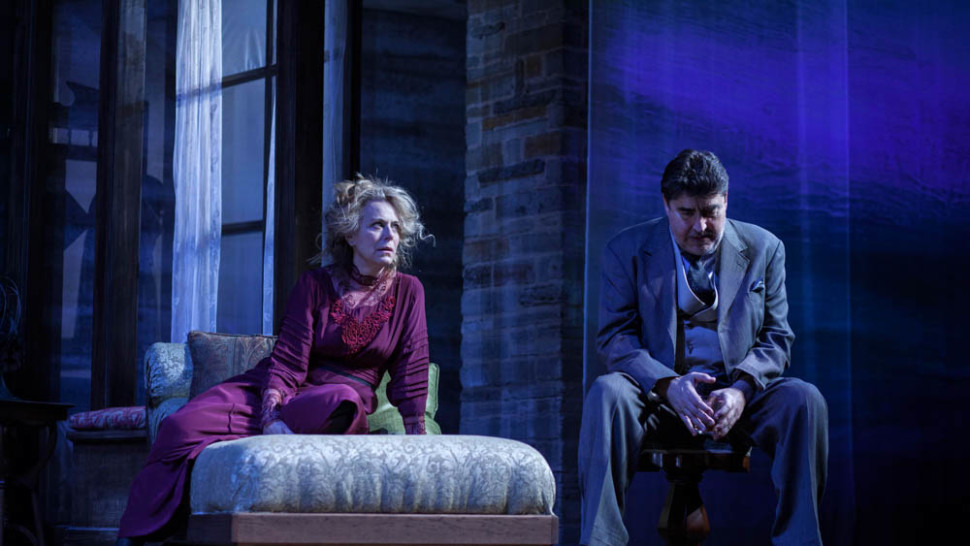 When was this written? Who wrote this? Okay, I admit, I didn’t ask the second question because the sole reason I went to see Long Day’s Journey Into Night was because it was written by Eugene O’Neill, thought to be the greatest American playwright (or certainly one of them) of all time, and this, his greatest play. And it’s on stage, people. Remember reading it in theatre school? Yeah, I don’t either. So this rare opportunity is yours—not only if you reside in the City of Angels, but if you live anywhere in the country; BroadwayHD will be streaming it live on March 11th at 7pm PST/10pm EST, with the broadcast then available on-demand through March 21st—if you have a subscription, of course. And this will the streaming site’s first broadcast from the Geffen Playhouse! But let’s go back to the first question. I did actually wonder to myself when this humdinger of a play was written, for two reasons: it’s really long and it’s really current. Current? Read on . . .

Mr. O’Neill wrote the this semi-autobiographical memory play in 1941. He died in 1953 and the play made its debut in 1956. It seems Eugene O’Neill didn’t want the play published until 25 years after his death, and never wanted it put on stage. Realizing the play was written largely about his own life, it’s not hard to imagine why this would be his wish; obviously his desires were not honored. LDJIN won the Tony that year for Best Play and Mr. O’Neill was posthumously awarded the 1957 Pulitzer Prize for Drama—no surprise there.

The play’s opening scene is morning at a summer home in New London, Connecticut in August, 1912. The Tyrone family crumbles before our eyes, in one long day (and yes, one long play). Mary Tyrone (Jane Kaczmarek) is newly back in the throws of a terrible, terrible addiction. Youngest son, Edmund (Colin Woodell), is terribly sick with consumption, the disease which killed his grandfather, and is being sent away to a state sanatorium because his father, James Tyrone (Alfred Molina), is too cheap to pay for anything better. A former famous theatre actor, Mr. Tyrone has an irrational fear of being sent to the poorhouse. The fear, however, does not extend to keeping him from making shady real estate deals. Jamie, the eldest son (Stephen Louis Grush), is good for drinking and hanging at brothels, and that’s about it. As the day goes on, the “poison” in Mary takes her farther and farther away, while the rest of the family drinks and drinks (and argues, and manipulates, and attacks) . . . and drinks . . . just to keep going/dying. The 3-hour-and-20-minute show is far from the “feel good show of the century.” It’s a downer . . . and it’s pretty amazing. If you have dealt with addiction or an abusive family, this show will ring as true and current as if it were written yesterday—so current . . . alarmingly current; it makes you wonder if we as a society have made any progress at all.

The cast is solid with a capital S-O-L-I-D. You may think the reason to get yourself to the Geffen quick-like is to see Alfred Molina and Jane Kaczmarek, and it is a good reason, sure, but no more reason than to see the rest of the great cast. Their two roles as the patriarchs of the family are tremendous, but the ensemble is what wins.

Of course, you have the luxury of seeing this epic show with some production value to back it up. The haunting multi-level set (Tom Buderwitz) and lights (Elizabeth Harper) enhance the experience for sure. I can’t find anything to say against the direction (Jeanie Hackett) either. I may just be failing in my “reviewer” role. Okay, here’s one thing that didn’t work: in between Acts, there were projections (I believe of Eugene O’Neill) and voiceover (and I still don’t know of what) that just didn’t work. I couldn’t hear much of it and even if I could have, I doubt it would have won me over. I’d be more than content to sit with my own thoughts in the darkness while the crew reset the props. There was plenty to ponder, that’s for sure.

If you are a theatre person (and you know who you are), you must not miss this important show. I’d say it’s your duty, but not one that should be dreaded. We theatre lovers get the opportunity to see some of the great American classics in LA from time to time; it’s not unusual. But the opportunity to see Long Day’s Journey Into Night is certainly more rare, possibly matching the rarity of it’s relevance, though written long ago. The country may be able to see it on the small screen, but we in LA have the honor of being able to see it in person.

I’ve been saving this for the right time: Trust me, go see this show.  (And Pro Tip: arrive well caffeinated.)

2 pm Sunday… there are exceptions