Questions & Actors: Write Your Own Role

If you want to win an award, write your own role!

Actors, how many of you are waiting around for that perfect role or, for that matter, that one audition that will give you the role of a lifetime?

WHAT IF instead of waiting for something to happen to you, you make something happen for you? Write your own role, win an award, and create your own destiny.

Well, that’s what happened to April Audia. She booked her first role at 18 in Fast Times at Ridgemont High and continued to work steadily in TV, film, commercials, and theatre. As a conservatory trained actor, she found her meatiest roles on stage, but found it much harder to book those starring roles on-screen. However, never deterred, she continued to act in show business until she decided to take matters into her own hands! She co-wrote, co-produced, and starred in the web series Long Island South Shore, got accepted into the LAWebFest (The Sundance of web festivals), and walked away with the best actress award! Now she is being encouraged to continue on with season two. Meet April Audia, one of the most inspiring actors I know.

Karen Pavlick: April, first of all, I remember when I met you in Stella Adler’s theatre production of Interruptions and knew then you had “Best Actress” written all over you! Now you’ve written a role that wins you that honor. You never gave up—I admire that and will talk about that in a moment, but first how does it feel winning the Best Actress award against other talented women from all over the world?

April Audia: That’s a good question, because one of the things I thought about is how to judge acting when it’s global, because everyone from every country probably communicates differently. Winning globally meant a lot to me because I feel that however the judges had to be affected by a performance, it had to be by something that is in the human spirit that crosses lines of language and cultures, yet at the same time they felt something organically that could have been done in any language. I felt very honored because I felt like they were responding to a truth in the acting.

KP: Did you have any expectation or hopes of where your web series Long Island South Shore would lead?

AA: I didn’t do this web series with expectations and hopes that were result oriented, I was more interested in the journey of learning how to put a web series together, tell a story, and create a role that was meaty that I wanted to do. In the fantasy world, we have expectations and hopes of where we want things to lead, but then there’s the reality world, which is the grind of the everyday of getting it done and then seeing where it’s actually going to lead. 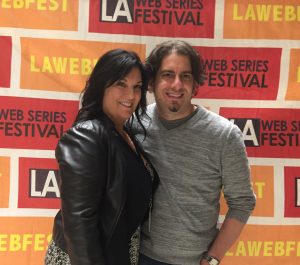 KP: How did this series get created and where did you come up with the title and plot?

AA: I met the director of the web series, Cat Torres, when she was a film student. We did a student film together and connected. We had the same heartbeat, both being from Long Island. She had a thesis film called Shades Over Levittown, which was about the town where she grew up, which, coincidentally, was just one town over from where I grew up in Long Island. The web series stemmed from her thesis film. Years ago, I had seen a TV show about the North Shore of Long Island and it was nothing like the Long Island Cat and I experienced, so we wanted to be more specific because the North and South Shores are completely different—and Long Island South Shore was born!

KP: What made you decide to do a student film at this time in your career? Because it really paid off for you!

AA: I think it’s very important to stay connected to the younger generation. There’s also a side of me that feels like I’m giving back in a strange way. I don’t do student films that often. Cat’s was the last one I did, and that was five years ago. I just had this creative connection with this girl and we’ll probably work together for the rest of our lives. When I was a kid I always wanted my Martin Scorsese because De Niro talked about how he met Martin in film school. So when I met Cat, I really felt like I met the Martin Scorsese to my Robert De Niro.

KP: There are many actors I know who have moved on to other careers after years of not “making it.” What has kept you so passionate about pursuing your craft?

AA: I guess it depends on your perspective of what making it means to you. When I moved to Los Angeles at seventeen, I made it. When I got my first extra job, I made it. When I got an agent, I made it. When I got my SAG card, I made it. For me, I enjoy the journey, the fight, no’s don’t bother me. When I get a no, I don’t look at it like it’s the end of the road, it’s just an opportunity for me to look in a different direction. I never came out here to be whatever a “star” is—that’s just something created in the publicity department a long time ago! I came out with the idea “this is what I want the rest of my life, to be wherever that leads me.” I wanted to live an artistic life. You really have to enjoy the uncertainty of tomorrow. I never felt like a failure. I suppose people walk away because they felt like they failed, but walking away was never an option for me, it would be like walking away from my family. It was my job if one door shut to find another one that would open.

KP: To all the actors who don’t feel they are writers or can’t seem to come up with a good idea for a project, what advice would you give them?

AA: Lets just say I’ve never considered myself a writer. I was always a good storyteller and liked being in front of people, but never a writer. I did take a writing class to start writing a one woman show. It was very difficult to write and then be exposed to a class. However, if you get yourself with the right teacher and in the right atmosphere, you will be encouraged. We are all writers, we are all storytellers. If you have a story, I say just start writing it. If you need to bring in a co-writer, do that. Just start. We didn’t know what we were doing, we just figured it out as we went along. Don’t have a result to where you want it to take your life, just start and let it take your life.

KP: What’s next for you? Rumor has it you are New York bound this summer; what are your NY dreams?

AA: I’m doing a workshop at Stella Adler theatre in NY, coincidentally the same theatre where we met in LA. It’s about writing and creating your own one woman show. I’m also doing an outreach program on Rikers Island that I’m really excited about!

KP: I have a feeling that you will book a Broadway show and not come back to LA!

AA: From your mouth to God’s ears!

AA: Surround yourself with love. Remind yourself why you are doing it. If you no longer have the answer, move on. You don’t have to prove anything to anyone. Live your life for what makes you happy.  Be patient—know it’s a craft and a life-long journey. We all have a reason for being here. We all have a story.

KP: Your story reminds me of Napoleon Hill’s Three Feet From Gold where a couple men were drilling for gold. After not finding it, they quit and sold their machinery for almost nothing. The new owner of the machinery did some calculations and found that the gold was just three feet from where the men had stopped drilling.

To check out April and her web series go to: