Diversity in casting simply means that our screens reflect the true diversity of our world. This ensures we are engaging with content showcasing authentic portrayals of our daily lives. According to a recent US census, disabled people make up 19% of the population meaning nearly 1 in every 5 Americans live with a disability. That is an alarming statistic, especially when you stop to consider whether these numbers are being accurately reflected on our screens.

A recent study by Variety found that 95% of disabled characters on television are actually played by abled-bodied actors, citing that in fact people with disabilities are the most underrepresented minority on our screens. Someone who understands issues on diversity, especially in regards to actors with disabilities is my friend Jason Stojanovski.

Jason is an Australian born actor of Macedonian background born with cerebral palsy. He began acting professionally at the young age of 12 and despite the challenges he would inevitably face as an actor with a disability, he graduated acting school and become a working actor for film, television and theatre in both Australia and the US. Jason also acts as an advocate for people with disabilities, being named by Cerebral Palsy Australia as a “Cerebral Palsy Champion” in 2008. He has been on talk shows discussing his disability and acting career and has been on many panels in the US discussing diversity in casting for people of colour and those with disabilities. Jason is a long time friend of mine and someone that has inspired me for many years through his talent, resilience and wisdom.

I was privileged to sit down with my friend to discuss some very important topics such as diversity in casting, living and acting with a disability and dividing his time between both Australia and LA. I hope that his insights and experience inspire you as they always have me.

M: Firstly, how did you become an actor?

J: Luck? Fate? Both? When I was 12 my older brother won a few free acting classes as a prize in a competition. He was way too shy to ever consider actually taking the class, so my mother forced it on me. As cliché as it sounds, it really did only take one class for me to fall in love and begin forging my path as an actor.

M: Why did you initially decide to pursue a career in LA?

J: It did feel at the time that having a disability, not to mention being of ethnic background, was more of a roadblock in Australia than it was in the US. I noticed a big difference in the attitude toward me as an actor of diversity – The Australian “We’ll have to see if your disability can work for the role” versus the American “That’s great! We’ll make it work”. Neither attitude was negative, but the American was definitely more excited so to speak.
It was a natural progression for me I think, as an actor who was serious about building a career in this industry it made sense to gravitate to the place that had the most opportunities.

M: As an actor with Cerebral Palsy, what have been your experiences as a working actor with a disability?

J: For the most part, having CP as an actor has been a positive. Don’t get me wrong, having a disability isn’t fun by any means but everyone has challenges they face on a daily basis and we all have our limitations, as actors, as artists and just as people in general. But with that said, my disability has afforded me some opportunities that would have been otherwise unavailable.

M: So for you, how important is diversity in casting?

J: Short answer? Very! It’s a question that gets tossed around a lot and I’m not sure why. As the saying goes, “Art imitates life”. Everyone knows what a wonderfully diverse world we live in so of course I believe that it should be represented on our screens and stages. 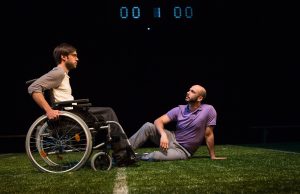 M: I agree wholeheartedly. Do you feel changes are being made in the industry towards more diversity in casting?

J: I do. I think most of the change that has come forth in recent years from a diversity perspective has come from the ground level. It seems like writers and show creators are writing stories that require the cast to be far more diverse than ever before which in turn causes casting directors to actively seek out a higher level of diversity during the casting process. Almost every single casting brief I see in LA these days will say things like “open to all ethnicities,” “actively seeking performers with disabilities,” “committed to diverse casting,” or some message to that effect. But most importantly, walk into the waiting room of any casting in Hollywood and you’ll see the different faces and know that those messages are more than just words on a screen.

M: You have been involved in diversity workshops in LA, what have you gained from these experiences?

J: I mentioned that my disability has afforded me some opportunities that would have been otherwise unavailable. Being invited to the diversity showcase at the Directors Guild of America is definitely an example of that. I was lucky enough to work closely with multiple well-respected casting directors as well as people like Director Peter Farrelly (Dumb and Dumber). Experiences like that have allowed me to build strong and lasting professional and personal relationships that will prove valuable in the future.

M: What advice would you give to an actor pursuing a career in LA?

J: The same advice I’d give any actor pursuing a career anywhere! Don’t take rejection personally. The amount of “no’s” you’ll hear in this industry will outweigh the yes by an incredibly large margin. It’s the same for every actor, that’s just the nature of the beast. You can be amazing and still be wrong for a job, and that’s ok! The quicker you learn that, the happier you’ll be!

M: What is the greatest piece of advice you were given?

J: Well I don’t know if this can technically be considered “advice” so to speak, but I did read an article recently, written by a friend of mine Miranda O’Hare and…..

M: HA! I appreciate where this is going!!!

J: Well in the article you quoted Wilson Mizner, “I respect faith but it is doubt that gives you an education” and that really struck me. We need to remember that it’s okay to not be okay sometimes. That from every negative experience or encounter or emotion breeds an opportunity to learn something, whether it be about yourself or the world we live in and that’s a beautiful thing!!

M: What has been your career highlight?

J: I try to make a habit of investing myself deeply in everything I do as an actor so I think every job is a “highlight” in some way or another, but there are moments that will always stand out. Recently I led a cast of amazing actors in stage show called Colossal at the San Francisco Playhouse. One night after a show I came out to the lobby area of the theatre and was talking with a cast mate when a young lady approached me, her face still wet with tears and she said “I will never forget what you did on that stage tonight, it changed me…. Thank you!” Those moments are the reason I love my job and why I want to do this with my life.

M: Lastly but most importantly, what are you grateful for?

J: My family and friends. Most people are well aware how difficult it can be at times to pursue a career in entertainment. There will undoubtedly be times when the challenges we face exhaust us and can seem impossible to overcome in the moment. But having a solid base of people around you always helps to remind you that anything is possible and we are never truly alone.

Miranda O’Hare is an Australian actress and writer living in LA.Her recent credits include playing the lead role of Ruby in Australian feature film Indigo Lake. She also plays Jax, one of four female leads in US horror/thriller film Coven to be released later this year. Miranda is currently shooting series Killing The Cure, playing the female lead Adrianna. The series shot all over the world, including Africa, China, London and the States and set for release in 2018.