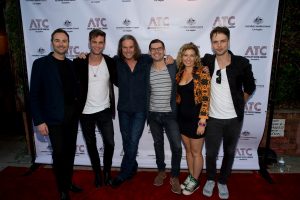 Cast of Ruben Guthrie at ATC

The theatre is the oldest form of story telling, predating even writing and has always held an important kind of currency in the world. The theatre encourages and allows society to fully examine what it means to be human, acting as a kind of mirror to society and ourselves.

David Mamet said “the theatre is where people go to hear the truth.”

In our current political and global climate, the role of theatre, storytelling and ‘the truth’ is perhaps more important and necessary now than ever before. 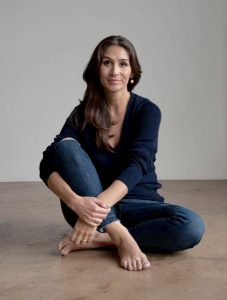 The Australian Theatre Company, based in LA, believes wholeheartedly in the importance of theatre and the place of storytelling, especially in a cement city not generally associated with a thriving theatre scene. The goal of the ATC is to bring Australian stories to the US with a vision to become an integrated and exciting part of the cultural landscape of Los Angeles. The ATC’s recent works include Holding The Man written by Playwright and Gay Rights activist Timothy Conigrave and directed by revered acting Coach Larry Moss and a hugely successful run of Ruben Guthrie written by Brendan Cowell.

I sat down with ATC’s Co-Founder and Head of Talent, the unstoppable Jackie Diamond to discuss strong women in theatre, the trials of starting a theatre company and why sharing storytelling and theatre is vital to our very existence.

—-‘Theatre is a safe place to do the unsafe things that need to be done.’—–
John Patrick Shanley

You worked for many years as an acting coaching and are also an actress yourself, what made you decide to transition into producing theatre?

I don’t really see it as a transition. To me, it’s more of an addition. I’ve been coaching actors privately for years, and I still do, but I’ve also been producing theatre and building a theatre company here in Los Angeles with my ATC co-founders, Nick Hardcastle, Joshua Thorburn, and Nate Jones. ATC has definitely taken up a large amount of my time, but it’s been such a rewarding experience. We have been working on developing our education program and when the time is right, I’ll begin teaching weekly scene study classes again. There is such an abundance of talented actors who want to work, and so many stories just waiting to be told, so to be able to be a part of making that happen is very exciting! It’s an incredible feeling knowing that we are actually creating work and enjoying the artistic process along the way.

How did you become involved in ATC?

Well, it all started with a reading of ‘Holding the Man’ in Hollywood. ATC didn’t actually exist then, but a student of mine who was narrating invited me. That’s really where it all began. I was so deeply moved by the story and the actors that a few weeks later I reached out to Nate (who had arranged the reading) and let him know that I wanted to be involved. At that stage, it was just Nate and Josh. Nick had also attended the reading through friends, and he reached out to Nate immediately afterwards. So, the two of them began pre-production on HTM, then I joined in about 6 weeks later, and not long afterwards we began rehearsals with our director, Larry Moss. ATC was born out of producing our first play.

Theatre is a creative medium that is not generally associated with Los Angeles, why did ATC decide to set up shop in LA?

I suppose the simple answer is that we are all based here in Los Angeles. The interesting thing is that although L.A. isn’t typically thought of as a theatre town, it has more theatre spaces than any other city in the U.S., which means that L.A. is just hanging out for more great theatre!

Why is theatre important to you?

Oh wow, so many reasons! As a teacher, I know the discipline that can only come from training in the theatre. It’s why the very finest actors ground themselves in theatre. Actors like Mark Rylance, Cate Blanchett, Geoffrey Rush, they all work all the time, and continue developing their craft. I think it is also important because sharing stories is vital to our very existence. Our own sense of identity and purpose comes from the stories we’re told as children, and that’s really all we’re doing in the theatre, isn’t it? Sharing stories. We walk into the theatre and take a seat, not knowing how we’ll be affected, or where we’ll be transported, but if we open ourselves up to another human being’s experience for those 90 minutes or so, it does something to us. We feel something, we think something, and we react to something. I think we crave this food for our soul; we yearn to be affected. Theatre does that; it’s alive, and it can be risky and unpredictable. It has its own energy, and it changes with every audience. There’s really nothing else like it. Theatre affects us in a very visceral and profound way.

The ATC had a Summer Series last year that focused on works by Australian women.
How important is it to you that female stories are a part of the content ATC showcases?

Considering females make up half our population, how could our stories not be relevant? It’s absolutely essential that our voices are heard, and I’m proud that we are doing something about that. You know, because for a long time they haven’t been, and I think the time has come. Stories written and directed by women, for women, and about women, are gaining strength all around the world. I have two daughters, and as a mother, and the only female co- founder of ATC, of course I want to see strong women achieving great things so that all girls can see what’s possible for them. I was particularly proud of our reading series ‘Works by Women’ last year, and not only that, but one of our plays had an entirely female team behind the scenes Director Jeneffa Soldatic, Assistant Director Leah Patterson, Stage Manager Joy Dabbs, and Assistant Stage Manager Quinn Pickering! Stellar female power, right there! This year women wrote two out of the four plays in the series and three of the four were directed by women! So, you can be sure that there will be more great works by women in our ATC future.

As the Head of Talent for the ATC, what do you look for when casting a play?

Well, I let the story dictate my search. Who are the characters that make up this world? I read the play many times to gain a deeper understanding of the story. I find that by doing this the characters come to life and give me a sense of who they are. I get to know them, then I search, and I search, and I search! I have a fantastic casting associate, Ratidzo Mambo, who works with me, and together we set out to find our characters. It’s a lot of work, but it’s such a wonderful process. 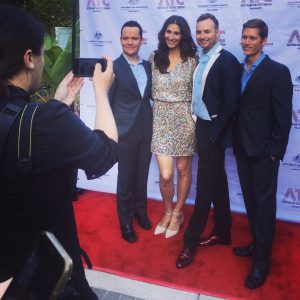 What advice would you give to any person looking to start a theatre company?

Bahahahahahaaaaa!!!! I would say, take all your money, throw it in a pit, don’t sleep for 10 weeks, and then if you still feel like you want to start a theatre company, best of luck to you!

What play should everyone read?

Lastly, what inspires you?

Curiosity. I’ve always been interested in people and their stories. Why we make certain choices, or adopt certain behaviors is incredibly fascinating to me. I love learning. I love to dream and wonder and create. I’m inspired to continue being curious for a long, long time to come.

Miranda O’Hare is an Australian actress and writer living in LA.Her recent credits include playing the lead role of Ruby in Australian feature film Indigo Lake, released in April 2017. She also plays Jax, one of four female leads in US horror/thriller film Coven also to be released later this year. Miranda is currently shooting series Killing The Cure, playing the female lead Adrianna. The series shot all over the world, including Africa, China, London and the States and set for release in 2018.