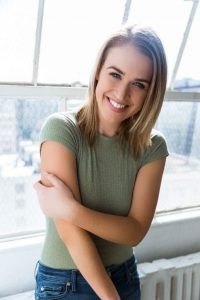 “We constantly shape shift, we figure out ways to attain our dreams and pursue them at full force.” – Miranda O’Hare

Recently, I went to a casting for a feature film here in LA. The usual transpired, it was in the Valley which with traffic (and there is always, always traffic in LA) is an almost hour long drive from my apartment in West Hollywood, sometimes more. It was a balmy 100 degrees (LA is in a constant state of sweltering heat). Despite the usual challenges, I arrive with five minutes to spare, deeply impressed with myself for not being late. I have my script in tow and a mild whole body sweat that I’m trying to pass off as a general glow. I sit in a packed waiting room; the actor sitting next to me me tells me that they’re running an hour behind. Excellent. I wait, I run over my script, I eat a snack in my bag, I stare at my phone, time passes. Eventually after an hour and fifteen minutes, I am called into the casting room. As I walk in, I am surprised by just how many people are in this room, mostly men. Very little is said to me. Someone asks me to slate and to begin the first scene; I barely know where the reader is.

I begin the scene and I tell myself to block everything out. As I am reading, I notice that there is a loudly whispered conversation between three people. I catch myself looking around the room; the entire room is either in a conversation or texting on their phones. In fact, no one is looking at me except the camera and the reader who is essentially half asleep.

I leave the audition, stand on the street outside the casting office and wonder if 2pm is too early to start drinking. I suddenly begin to berate myself for everything I could have done differently, I feel very hot and very uncomfortable.
I suddenly reflect on everything I am feeling in that very moment and realize that one overwhelming feeling resides.

Just the day before, I had been to a casting that I felt had gone especially well. I had left that casting feeling buoyant, I felt that I was capable of something, that there was magic there. However the very next day, with just one casting in one room, all that was undone.

As actors we’re used to hearing no, in fact largely, we don’t even get the no. Mostly, we just get radio silence until we hear they cast someone else and that’s it. But sometimes you leave a casting and you don’t need to experience the radio silence to feel rejection. I don’t need to remind you that all of this, the rejections, the radio silence, is just part of any creative pursuit. Rejection and creativity are old bedfellows.

Does knowing this make it any easier? Well, sometimes yes and sometimes no. I have been auditioning for a long time and yet rejection still hurts sometimes.

So how do we handle it without losing our minds? What does rejection actually do to our brains and how can rejection make us better people?

I went on an exploration of rejection and this is what I uncovered. I hope as always it inspires you to continue your unrelenting pursuit of creativity and joy.

Once we believe in ourselves we can risk curiosity, wonder, spontaneous delight or any experience that reveals the human spirit. – E. E. Cumings

REJECTION, SCIENCE AND THE BRAIN

My mission to delve into rejection was not an easy task, especially an optimistic attempt to uncover secret joy and value in rejection. It is scientifically believed that due to our hunter gatherer past when we lived in small groups, being rejected from your group would often mean certain death, as surviving alone was no easy task. In this way, our clever brains created the emotion rejection as a way of reminding us to stay in our tribe and remain safe. It is believed those that survived, passed on the emotional reaction through their genes and thus we have our human response to rejection. Neurological research into our brains and rejection has also found that our brains actually feel rejection in the same way we feel physical pain, meaning that depending on the severity, rejection is literally a painful experience. So if we are programmed genetically to actually experience rejection as arguably one of the most painful human emotions, how do actors take on regular rejection and remain confident, galvanized artists pursuing their dreams and presenting their best self?

In my opinion the answer to coping as an actor with an often- exhausting treadmill of rejection lies in two things: self worth and gratitude. Knowing this in my heart, I still struggle with these two things daily. Yet I have seen my own happiness transform through the power of gratitude. Often just knowing how much you already have can lessen the blow of a rejection and helps you to live a much happier life. Gratitude is often a difficult task but a change of attitude can change your life. It can take time and requires a little rewiring in your brain. Taking steps towards gratitude can start small, I personally started by writing down ten things I was grateful for every single morning. I was amazed that I never ran out of things to write down. Just how our brains are wired to experience rejection in the same way we experience physical pain, scientific research has shown that people who practice gratitude daily, experience more personal happiness and are less likely to feel depressed.

REJECTION AND SELF WORTH

Self worth is a complicated journey. Handling rejection like a pro means knowing your value and understanding that it is not linked to a booking an acting job. The greatest pain is self-inflicted and the way we speak to ourselves in our head is the narrative of our life. Don’t say things to yourself that you would not say to your best friend. When experiencing rejection, it might be best to avoid things like social media and remind yourself that so many actors and creatives have experienced rejection and gone onto to do incredible things, rejection is just a small but necessary part of being an actor and pursuing your dreams. When it comes to not booking a job, remember that often it can have little to do with you and more to do with finding the right fit or look. Sometimes we take a personal affront to something that has little to do with us personally. A friend of mine is a casting director for commercials in LA. He told me recently that he has seen actors lose huge national commercial campaigns with large paychecks attached due to something as simple as the color of their eyes or that the client felt their look was too mainstream or ‘not mainstream enough.’ He is often surprised by the reasons actors lose jobs, stating they are often for reasons completely outside of the actors control and largely not because of performance.

Recently my sister told me that a few months back during a conversation on the phone, I said to her, ‘I want to be the kind of person that goes relentlessly in pursuit of my dreams.’ I don’t remember saying this nor do I know exactly how I managed to make such a dramatic statement in casual phone conversation but yet it reminded me of something. All humans experience a degree of rejection in our lives, it is a character building exercise. Sometimes our greatest rejections become defining moments in our lives, sometimes they make us better. Actors experience rejection on a larger and more consistent scale, even experiencing rejection four to five times a week. But isn’t that what makes actors so unique? Just like I dramatically told my sister on the phone, we pursue our dreams unrelentingly. We constantly shape shift, we figure out ways to attain our dreams and pursue them at full force. There is some magic in that, some romance to the unrelenting artist facing rejection and uncertainty that against all odds, continues on. And perhaps, we should not forget the magic of going after something just because you love it so much. Rejection, heartache and confusion aside that is a worthy pursuit.

Miranda O’Hare is an Australian actress and writer living in LA.Her recent credits include playing the lead role of Ruby in Australian feature film Indigo Lake. She also plays Jax, one of four female leads in US horror/thriller film Coven to be released soon. Miranda is currently shooting series Killing The Cure, playing the female lead Adrianna. The series shot all over the world, including Africa, China, London and the States and set for release in 2018.