His & Hers: The Balancing Act of Sensible Fitness vs Obsession 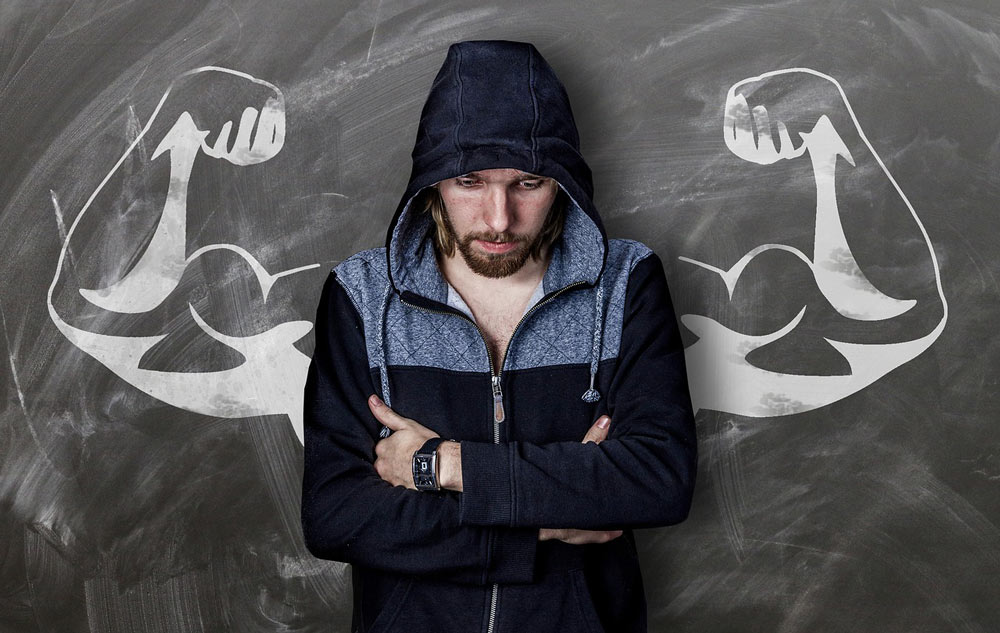 Welcome to His & Hers, in which an entertainment industry business advisor and actress/mentor give their take on the latest topics that come up when they’re mentoring and coaching actors.

This month John Byrne, an entertainment industry business advisor who writes for The Stage and coaches actors around the globe, compares thoughts with Angela Peters, actress and acting mentor with clients in the UK, LA, and AU, on the topic of the balancing act between being sensible with fitness vs unwarranted obsession.

John Byrne: In addition to working in the acting world, I have several clients in the music industry. While the myth that every road musician is a combination of Ozzie Osbourne, the late Lemmy from Motorhead, and all four members of Spinal Tap (including the self-destructing drummers) is as untrue as saying that all actors are like Stephen Toast. I have come across my fair share of wild men and women over the years.

What has always interested me is that, no matter how much sex, drugs, rock and roll. and dodgy motorway food even the hairiest of heavy metal heads put their bodies through, instruments tend to be treated with kid gloves, sometimes even getting their own seat in the van or on the plane between gigs. And this makes sense—the average concert-standard instrument is not only eye wateringly valuable, but also the basic tool of the musician’s trade.

Which leads me to our topic for this time round – An actor’s health and general appearance.

Recently I did an interview with a well known TV actress in which she recalled being asked to lose weight for an early role and being okay with this. Obviously, it’s not for me to censor what people say, especially when they are talking about their own experience in a previous era, but I had a lot of empathy with the actors and actresses—many self-describing as ‘plus size’ – who came out on social media to express disapproval that she would consider such a course of action just for a role.

Personally, I have always believed that there is room in our business for all shapes and sizes, and indeed the more of the merrier. That said, I think there is a fine line between ‘accepting who we are’ and ‘being the best version of who we are.’ Travelling fairly frequently between USA and UK, it seems to me that while sometimes the industry across the Atlantic can be a bit too focused on ‘perfect teeth, perfect body, perfect hair,’ on our side of the water, we can sometimes slip too far in the opposite direction. I know gyms are expensive and—despite what the government will tell you—eating well on a low budget can be very difficult. I know auditions often have to be squeezed in during a break from the day job, after a dash across town on a crowded tube, but ultimately an audition is as much a job interview as an artistic exercise, and good health, good smile, and good grooming can go a long way to adding that extra layer of ‘presentation,’ which can make all the difference.

Angela Peters: This is such a tough one, John. I absolutely agree that actors need to find a healthy level between looking good and feeling good, without the need to attend 10 gym classes a week, but I also worry about appearances in this industry and what is okay vs an unhealthy obsession with looks and size.

For actresses especially, we all too often feel the pressure to look a certain way and to be the perfect size for our age and industry. I still can’t open Stylist magazine on a Wednesday, or look at Vogue magazine without seeing an almost perfectly posed actress of some description, airbrushed and styled in such a way that screams, I am perfect. It’s how this industry has been my entire life. And while plus-sized models come into vogue every once in a while, they certainly don’t last in the film scene—Mad Men was a wonderful show for demonstrating women with curves that screamed sensuality and sophistication.

I once booked a lead role in a feature film where the producer was adamant that in order for my career to climb, I would need to get breast implants. He made comments on more than one occasion about this, and while he wasn’t in any way sexual with me, it did leave me feeling awfully uncomfortable—wasn’t my athletic figure and small size good enough? Surely Emily Blunt and Emma Stone didn’t get told they’d have to move up a size to make it. But this certainly is indicative of the world we live in today, and the pressure to conform to the ideal look and size.

Whilst I do agree that sometimes over on our side of the pond—we can tend to be a bit lackadaisical—I do prefer this to the overdone, overstyled, perfectly sculptured body. We just don’t look like that as humans. And it’s more than that. It’s up to the directors and the producers who make the executive decisions to recognise that an actor can be perfectly wonderful in a role, without being size zero or having a ten pack of abs. It’s just not realistic, nor is it healthy for young men and women to aspire to this kind of ideal. 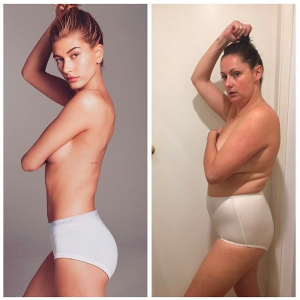 I must admit that I am definitely a fan of social media, and I’m all over Twitter and Instagram, but one thing that
drives me insane on Instagram is the need for women to add scantily clad images of themselves in provocative poses, or pictures where they’re pouting constantly. It actually makes me livid. This is not how we walk and talk on a daily basis, so why would we pose like this for a tiny mobile sized image? And for me personally, Celeste Barber has to be the best thing that has ever happened for Instagram and body image worldwide.

So yes, I do believe there’s a healthy balance that has to be waged, between looking good and exercising appropriately, but perhaps the bigger push should come from above to encourage a change in casting types, so we show the children of tomorrow that normal is excellent.

JB: I think you are absolutely right, Angela, that we need to make a strong distinction between ‘looks and size’ and ‘appearance and health,’ and that the industry needs to even more so. The former is something we have no control over, and is certainly not something anybody else has a right to decide standards for (much as they may try).

Your experience with the morons asking for breast implants reminds me of some selfies I was once sent by a young actor asking if I thought cosmetic surgery would improve her chances of getting cast. My answer was—and still is—that there is NO casting worth getting radical surgery for, nevermind the fact that, as with any other aspect of casting, there are no guarantees that this move would bring in more work in the first place. Your best chance of getting cast, not to mention of staying sane in this business, is to be the best and healthiest version of you—the real you—that you can be.

I am glad you brought up social media because I think actors have always been prone to making unhealthy comparisons with others. As we all know, it can be a very lonely business when we are not working, but social media has definitely increased the possibility that we beat ourselves up for not looking perfect and having perfect careers when the perfection we are judging ourselves on doesn’t exist in the first place. Ironically, it is during those down periods when we can start feeling low, let our exercises and eating habits drop, our grooming suffer, which makes us feel even less confident and the spiral continues.

One positive thing that is happening health wise in the industry is that through movements like #Time4Change, the importance of mental as well as physical health care is being acknowledged. A big shout out too to www.bapam.org.uk, who do a huge amount of work providing healthcare to performers often free.

AP: Yes yes yes. Organisations like that who help with identifying what is good mentally and body wise are so important. And actors shouldn’t be afraid to reach out and seek help if they feel they aren’t well-adjusted in regards to their own body image. This is a tough old industry full of rejection, and body image is just another challenging part of that.

You also touch on a massive issue on the rejection and work front—the downward cycle many go through when they’re not on the up. It is so important when actors aren’t booking that they maintain the ritual of good health, good mindset, and good work routine. If we aren’t working and we stop doing all the other important components that make us ‘good actors,’ like exercising and eating well, we will definitely feel worse, do worse, and then feel even more rubbish. It’s like they say with gratitude exercises—you have to practise the gratitude when you’re on the low, not just do it when things are going smashingly well.

So what should we do if we want to maintain a good body image, without being obsessed?

If you have a topic you’d like John and Angela to discuss, write in to support@castingnetworks.co.uk with your question or topic.

John Byrne is the Entertainment Industry Career Advisor to The Stage newspaper and Young Performer magazine and has over 30 years of experience as a writer, broadcaster and performer in his own right. He has lectured extensively at institutions ranging from The Guildhall School of Music and Drama to Fourth Monkey, has hosted special events for Spotlight, and been a guest expert for Equity’s Variety Workshops. Media and Publications work has included BBC TV and Radio, E4, Nickelodeon TV , Sky News, and BBC London Radio as a regular guest contributor and commentator. He has written scripts for Radio 4, Five and for the BBC World Service for whom he created its first ever comedy talk show The Junction Box. Published books include A Singer’s Guide to Getting Work (with Julie Payne), A Dancer’s Guide to Getting Work (with Jenny Belingy), Writing Comedy (now in its 4th edition), and The Agent E-Book (with Mary Elliott Nelson). Website: www.performingcareers.com