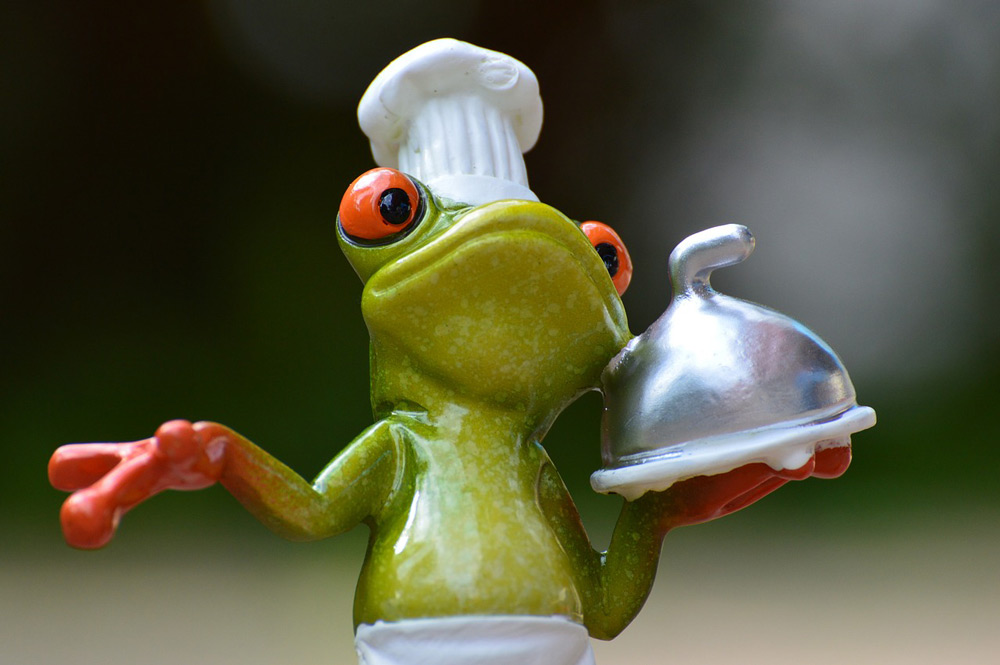 Happy New Year! Yes, it’s also just the next day in the week, but there’s something about 1/1/whatever that begs for a fresh start, a huge launch, an audacious goal. The problem is choosing which thing on a long list to sink your teeth into first.

If this is your conundrum (as it has so oft been mine own), allow me to humbly suggest “the frog”—that is, the nastiest, gnarliest item on your to-do-for-a-better-“me” list.

The phrase “Eat That Frog!” came to me via motivational self-help speaker/author Brian Tracy and his terrific book of the same name. (He lifted the phrase from Mark Twain, who originally put it like this: “Eat a live frog first thing in the morning and nothing worse will happen to you the rest of the day.”) In his preface, Tracy calls your frog “the one task that can have the greatest positive impact on your life and results at the moment,” and he goes on to exhort you to get in the habit of tackling that biggest-bang action item first every day, before doing anything else.

This logic is easily recognizable as the advice to address the nasty before indulging in the tasty, e.g. to exercise in the morning rather than putting it off until evening (when it will never, ever happen, especially in winter), or to dig into your creative work upon rising, rather than rolling over and checking email or social media. Not only do you have the advantage of getting it over with early (especially during a reboot, when it can seem like an onerous task), but you often get a bonus rush of righteous accomplishment that can push you through the rest of your day.

Over the holidays, I was reminded that your “frog” can also be the gigantic project with many moving parts that you dream of having done, but dread even thinking about, it so overwhelms you: going back to school for the degree or certification you know will change your life, but don’t know where you’ll find the time or money for. Moving from your small market to Los Angeles or New York and establishing a career as a working actor. Or, in my case, painting your apartment.

I realize that one person’s “frog” is another’s “whatevs,” and that redecorating falls under the category of NBD to most normal people. But for me, painting my apartment represented a massive, tangled snarl of terrifying things. Choosing a color! Moving all my furniture! Sanding walls! Trips to alien territory, a.k.a. the hardware store! It had become so big and so scary, I’d managed to push it to the bottom of the list over and over, rearranging furniture and artwork, decluttering, sprucing up with the occasional knick-knack or kitchen towel. But underneath it all—literally!—things got more and more dismal until, to borrow another icky animal metaphor, I was really putting so much lipstick on a sad old pig.

Help to the rescue!

What snapped me out of it was the cavalry, in the form of a close friend with mad capabilities in home rehab execution. He tricked me into making a long list of all the things I wanted to change about my living space in the new year, then quickly homed in on the big one I’d been trying to avoid. I fought it hard, right up until painting day, but he remained calm, detached, and persistent, nudging me gently, but firmly throughout the process. And now, six weeks later, not only am I waking up in a beautiful, inspiring space, I’m fired up to finish the rest of the “impossible” things on my list.

While it’s fresh in my mind, and the year is fresh, period, here are the big takeaways I got from eating my big frog for Christmas.

1. Get honest about your frog.

For a while, I could rightfully put off painting for bigger, uglier frogs: recovering from a nasty flareup of a chronic illness, for example, or filing my taxes by the extension deadline. Even tackling some major spiritual work took priority for a time. Eventually though, I could no longer deny that my dingy, sad walls were adversely affecting every part of my life, because they so messed with my outlook.

2. Find someone to be your frog-whisperer.

Preferably someone who thinks dining on your frog might actually be fun, or who is at least expert in it. And if you are on a budget, look for someone with complementary frog-eating skillz: my friend is wildly tech-phobic, where I could play with Photoshop, a WordPress backend, or the Microsoft Suite all day long. Trading helps with morale, with costs, and fosters bonding—so much goodness!

3. Break the big frog into smaller bites of frog (with excellent side dishes and palate cleansers).

There’s no way around it: a frog you can’t eat in one gulp is going to be a lot of unpleasantness. So it’s important to find ways not only of carving it up into manageable, bite-sized pieces, but to find things that will help that frog go down easier. (For house painting, I suggest excellent snacks and killer funk playlists.)

Whatever you’re looking to change in the coming year, I want you to find the help and hope to get you on the other side of it. Happy 2017 and bon appetit!