“What do I do? Why, I’m an actor and a script writer,” should be a simple thing for me to say to a new friend. However, as a matter of fact, it’s not. More than that, it’s painful.

Not because I’m, in any way, pessimistic about my professional choices or insecure about my successes. Rather, it’s because of the pessimism and presumed insecurity on the part of “external sources.” Now, I say “external sources” because I don’t want to generalise by saying that ALL people frown upon the creative arts, as this is far from true. But, over time, through some strange process of societal conditioning, a stigma has manifested. A stigma that I encounter in my day-to-day life. A stigma that screams “Uh-oh, another one bites the dust . . .”

Moreover, I’ve decided to take this opportunity to (politely and without finger-pointing) ask the stigma to BACK OFF by identifying — and hopefully raising awareness — of it’s five major prongs.

Excuse me while I prepare my best Macaulay-Culkin-in-“Home Alone” face. It’s a hard industry, you say? Well, in that case, let me throw this script at the director and dive-bomb into a seat at a criminal law lecture. Or–or, should I jump into a medical dissection room, where the stench of diced corpses is sure to be more palatable than struggling through a community production of “Othello?” A hard industry . . . sheesh. I’m glad you told me, because there’s no way I would’ve continued pushing this boulder uphill (like I’ve been doing for years) if I’d known that BEFORE.

The amazing thing about creatives — and I’m talking, from comedians to authors — is that they’re gifted. There’s no two ways about it. Spielberg was born with it, Slash was born with it, Shakespeare was DEFINITELY born with it. Their professions chose them in the womb, not the other way round. For most of us, it’s not a choice; it’s the only way to keep breathing. It’s in our blood, our shit, our tears. We do it because we have to. So when someone tells us it’s a “hard industry,” guess what, Detective? We already know.

It’s also beyond patronising. I mean, how would a teacher feel if you said to them, “you think you can teach children to count? Hmm, I dunno, that’s really hard.” Of COURSE it’s hard. Everything’s hard! Life’s hard! Y’think Neil Armstrong did the boney maroney all the way to the moon?! DIFFICULTY DOES NOT = FAILURE, PEOPLE. If that were true, everyone would fail at everything ever. Goodbye evolution, progression, science, the end. Don’t tell people that their lives are hard. It’s douchey.

Okay, wherever this came from, it’s monkey poop. I can count more than four people in the world who are acting/performing/publishing/designing/cartooning/singing to fans right now. Yes, there is/was only one Cate Blanchett, Jerry Seinfeld, J.K Rowling, Coco Chanel, Walt Disney, and Freddie Mercury. But if that’s the 1% you’re talking about, then you’re not talking about employment, you’re talking about fame. That’s a completely different thing. Yes, 1% of actors make it to ultimate stardom, but that doesn’t mean that the rest are unemployed. The main actors in The Walking Dead are not the only actors in The Walking Dead. How else could they have an ongoing zombie plague?

Also, if you ask around, you’ll find that creative artists are not the only ones facing high unemployment. I’ve spoken to friends of mine — qualified primary school teachers, journos, social workers and psychologists — who couldn’t find work if it was on Pamela Anderson’s breasts.

PRONG NUMBER 3: “What movies have you been in?”

(I know that this, particular example is specific to actors, but you can substitute it for “how many books have you published?”/”how many records have you sold?” etc.)

First of all, let me pose a question to a question. Are you blind? No, seriously, are you? Because don’t you think if you’d seen me in more than one movie, you’d recognise me?

What needs to be realised is that Hollywood-churned movies and TV are not the ONLY mediums of acting/writing/directing/producing. There’s also theatre, more theatre, a lot of theatre, short films, web series, documentaries, one-man-shows, improv, stand-up comedy, burlesque, YouTube vlogging, etc. And all of it counts.

Maybe, hopefully, aspiration-ally, one day, I’ll be in a few movies. But right now what I’m creating (outside of that) means something to a community of people. And one of the people in that community might be benefiting from it more than I could possibly know. So even though it’s not “Hollywood,” I take it as seriously as any film role.

Someone actually said this to me. And if I’ve heard it, I’m sure others (like me) have.

A lot goes on for creatives when they’re not working. I, for one, write when I’m not acting and vice versa. I have a friend who just recorded an album in between writing a book series and another friend who just wrote a book in between producing a TV series. There’s also classes, accent training, dance training, singing training, instrument practising, auditions, script-learnin’, book-learnin’, research-doin’, editing, referencing, and so on. Depending on the nature of your creative craft, there’s always behind the scenes polishing and oil-changing. Do top-grade athletes twiddle their thumbs in between Olympic games?

I am always an actor, arsehole. Until I decide that I’m not, I am one. 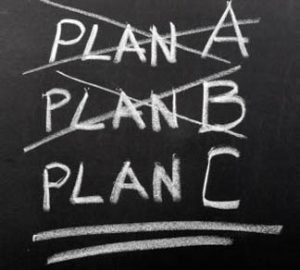 In the words of Elle Woods, “I don’t need back-ups, I’m going to Harvard.” (Unless you’re talking to Bill Gates, in which case back-ups are a part of his work. That was a bad joke.)

Creatives are not stupid people. They inject the mundane with fun, revolutionary thought and imagination; only intelligent people can do that. Therefore, as intelligent people, creatives understand that money (unfortunately) makes the world go round. We do go to universities, colleges, and other educational institutions in order to refine our skills and qualify ourselves. We do take on day-jobs in order to keep our shitty apartments. We do accept help and advice from those more experienced than us. We don’t, however, need a back-up. Until we, as individuals, make the decision to shift professions, we intend to be fully and completely invested in our creative pursuits. You wouldn’t tell a policeman that he needs a back-up, in case he gets shot; you’d probably get arrested for being drunk and disorderly.

This concept of a “back-up” is really just a passive-aggressive way of saying “career change.” And why do I have to think about a career change before I decide to change my career? If I’m not in the process of career change-age, why would I stress about it? I haven’t spilt the milk yet, so I’m not crying over it. Thanks though.

My intention here, of course, is not to whine or pout. More so, it’s to level-up (some) people’s understanding of the creative industry with their understanding of other industries. It’s to equalise creative artists with astronauts, cancer researchers, brain surgeons, and high-rise window cleaners because everyone’s in the same boat. Everyone’s pushing, shoving, and wiping the sweat from their brow! Just because the ancient Greeks made their actors live in squalor outside the city-centre (because apparently they were swine spawn), doesn’t mean we have to maintain that stigma in our much smarter, much quicker, much cleaner day-and-age. It’s easy to be kind to creatives — ask them what they’re working on, what their favourite thing about acting/writing/singing/making people laugh is, what their ultimate goal is, who their inspiration is.

You never know, they might thank you in their acceptance speech one day.

Claire is a NIDA-trained actor, UTS-trained writer and YouTube vlogger. She is also a lover of dogs, green tea, popcorn, horror movies and ABBA tribute bands.