5 Questions with Jaine Green from discover.film

This month Casting Networks interviewed Jaine Green, the Head of Festival and Chair of Judges at the discover.film awards, about how the indie film platform is changing how audiences can access short films for the better, and what she looks for in a great short film.

Casting Networks: Where did the idea for discover.film come from?

Jaine Green: Looking back, I can see discover.film was born out of a happy accident and necessity. Several years ago we made a short film called Cherry Cake, which did very well on the festival circuit, so we had fun travelling the world attending many of the major festivals. We were blown away by the quality of the other films and enthusiasm of the many filmmakers we met. However, the more we talked to producers, it became all too clear there was zero distribution opportunity for short films, which meant all this passion and talent was being thrown away. Few of us make a short film to become rich, but it’s ludicrous that there wasn’t even a platform for filmmakers to screen their work. We felt we needed to address this.

At first we simply developed discover.film, a platform where filmmakers can promote their films, audiences can watch short films for free, and where a community of filmmakers can share ideas. However, that quickly grew, and has continued to grow ever since. To be honest, what started as a passion project took on a life of its own driven by the needs of filmmakers, and it wasn’t long before audiences also started to dictate the direction the company took.

As a start-up, we work hard at staying dynamic and responsive to feedback from filmmakers and audiences alike, but the reality is we are carving markets as we go and are continually surprised by new demand and where we find ourselves. For example, I don’t think any of us would have predicted developing a short film app, but it’s been a continual request, so we are about to release the new discover.film app—and as I say we are as surprised by that as anyone.

With audience attention spans shrinking, people expect their entertainment both on-the-move and in mini-bites, so short films certainly feed an ever-hungry audience, and it’s simply a matter of supplying this growing demand. From the discover.film website we now provide cinema and non-theatrical distribution packages, have the free app, hold two short-film festivals a year, and help university students from around the world create award-winning short films.

But we are holding our breath for what comes next.

CN: Short films are everywhere now, with literally hundreds of festivals dedicated to the short form around the world, how does discover.film stand apart from rest?

JG: It’s true there are hundreds of film festivals around the world, which reflects both the diversity and demand in the market, and that’s very exciting. I like to think our success as the fastest growing short film festival in the world is down to the core values that discover.film was established—for filmmakers by filmmakers, and we have total respect for the dedication, talent, and passion that goes into every short film. After being disappointed by the impersonal welcome we received from some of the largest festivals in the world, we now work tirelessly to make sure our film festival is warm, friendly, and exciting. This reflects our thanks and respect, not only to the filmmakers who are lucky enough to screen with us, but also the thousands who unfortunately don’t, but who we never forget and always hope to see next time.

I think it’s also the attention to detail that attracts people. We want to make everyone feel special and honoured, so although we don’t have the budget of many more established festivals, all profits go back to filmmakers, and we know how to make every penny count. We screen our successful films at the breathtaking Phoenix Cinema in East Finchley, which is one of the oldest working cinemas in the UK, is steeped in history, and the excitement as the heavy curtains slowly part is palpable and never fails to take my breath away.

The festival attracts filmmakers from all over the world and we want them all to know that no matter where they started their journey, and wherever filmmaking takes them, they always have a home with the discover.film family. It’s been humbling to see alumni come back time and time again to support us and their peers.   Nothing cheers up my day more than an inbox of lovely thank you emails and the great reviews we receive. Both serve to remind me people do appreciate the effort the entire discover.film team makes, and why we work as hard as we do to ensure the event feels special, and why despite being new we have already been named in Film Freeway’s top 100 film festivals voted for by filmmakers.

However, we continue to grow, and every festival we add more screenings, networking events, investor roundtables, student workshops and, of course, parties. We keep growing and people keep coming, so we are thrilled to think we must be doing something right.

CN: On a personal note, what do you look for in a short film, and can you tell us about a short film you have seen recently that wowed you and why?

JG: As the head of festival and chair of judges, I’m often asked what I look for in a short film and I always come back to the discover.film mantra ‘Is a film entertaining?’ Unlike many festivals, we don’t have an agenda other than to entertain and bring some of the best short films in the world to screen.

I may sound old fashioned, but I want a beginning, a middle, and an end. I look for high production values, even in a low-budget film. In fact, I like to be shocked at how low the budget was. I want good acting, even if it is someone’s dad playing ‘gangster two,’ and above all I want to be surprised—all too often I know the end within the first minute of the film.   The common mistake for filmmakers is to make their films too long. I think there is the tendency to think a 20 minute film has more gravitas than one half its length. The truth is when it comes to scheduling you want to show as many films as possible, which means a film of 20 minutes needs to be three times as entertaining as one 7 minutes long. I’m not saying don’t make a 15 minute film, indeed I have made one myself, but ask yourself if it needs to be. I have watched many over 20 minute films that sit fine when viewed in isolation, but when book-ended by 4/5/6 minute films, drag like a wet wedding dress.   The reason we love short film is they have to be perfect, with every second counting. Many a feature films gets away with the first 45 minutes dragging but with a power ending that leaves everyone declaring it ‘not a bad movie.’ The best short films do not have the luxury of having a saggy middle, three endings, or poor performances. Every frame counts and that’s what makes them the wonderful art form they are.

Also, and this is just a personal taste point, I don’t like films that begin with a woman chained in a cellar—I see far too many, and unless she turns out to be a head chomping zombie, I don’t find it entertaining.

CN: What can a filmmaker expect when their film is hosted on discover.film, and what are the benefits?

JG: The benefits of the discover.film website are that we have an active and receptive community of 8,000 members constantly craving new content. Our audiences are experienced short film lovers and know what to expect, so films are well received and appreciated. Additionally, our online community is encouraged to message each other, and tend to be supportive, so don’t be surprised if you get an inbox full of potential future collaborators.   Our aim has always been to bring all filmmakers together and help them succeed in bringing their films to new, eager audiences and so far it’s working.

CN: Do you have any plans to further expand what discover.film currently offers in terms of the festival and online viewing platform?

JG: Yes, we do indeed. The festival is constantly expanding. The first festival was just a day long, but we just keep doubling, and our next will be held over 10 days. This enables us to offer lots of new exciting new events and screenings.   As I mentioned, there’s also the impending launch of our new app in the next few days, and we could not be more excited. The app offers a selection of free films, and for the best films around, we charge a small amount returning all profits to film-makers.   At just $1.99 per month, it’s less than a cup of coffee to watch. New films are added every month, and these can be viewed when and where you want to watch them, so we hope everyone downloads and supports short film.

CN: And a bonus question: where should filmmakers go to submit their film and find out more about you?

JG: Filmmakers can submit their film to the discover.film awards here.   Film fanatics can find us here.    And find out more about our app and download here. 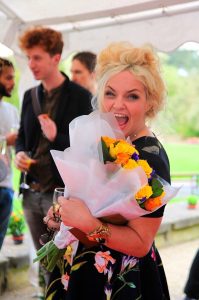 Jaine Green is a UK documentary maker. She has made more than 50 diverse films and commercials. Green has also directed theatre. Her West End debut was a production of Lip Service, a dark comedy about three women taking calls for a sex line. She won the Best Docu-Soap award at the National TV Awards and her short film, Cherry Cake, was an official selection at the 34th Vancouver International Film Festival, a finalist for the Best Narrative Short award at the 24th St Louis Film Festival, nominated for Best International Short Film at the 25th International Flickerfest Festival, and a Jury Selection at the 27th Palm Springs Film Festival.   Jaine Green is the Head of Festival and Chair of Judges at the discover.film awards.