Being an actor is a magical journey where every audition, and every meeting showers our existence with the hope we need to execute our dreams. And then, the magic is suddenly gone. Everything in this industry comes in waves. Regardless of ones success it is without a doubt, a roller coaster ride. However, it is during the downtimes when we must maintain a killer work ethic, strategize and above all believe. It is the ability to believe that becomes the ultimate artistry of the wizard and where the true magic resides.

Originally from Brisbane, Australian Daniel Feuerriegel first gained global recognition whilst playing Agron for three seasons on the acclaimed international TV Series Spartacus: War of the Damned, upon completion he landed in LA and hit the ground running, letting each step be dictated by his humble beginnings and warrior persistence.

Persistence has paid off and with recent roles in NCIS, Chicago Fire and Pacific Rim: Uprising, the Queensland actor has matured from a young gladiator to a dapper gentleman whose energy exudes that of a young Robert Redford whilst still holding on to a warrior mindset.

In short Dan is driven, intelligent and undoubtedly very talented. He is an actor with a plan, the courage and work ethic to make it happen. He isn’t jaded or delusional. He knows what he wants and most importantly understands why and how to get it.

Over a cup of tea at Alfreds on Melrose Place, Dan recently shared with me some of his challenges, goals and tips for conquering this unique business.

Alixandra: Firstly, what’s your advice on giving a successful audition?

Dan: Don’t Worry. Just Don’t! Also, be good with time management, be prepared and trust that you are prepared. When I first came to LA I was the ultimate people pleaser, I worried so much about what people thought. It’s different for me now but in the beginning I was just this kid from Brisbane and I wanted to please everyone. But that comes at a price. I have learned now to not worry about what people think. Just be prepared and trust you know the work. Just read the lines, if you drop a line, that’s ok, simply stay in character and keep on going. When I auditioned for NCIS recently, the audition went so quickly that I freaked out the whole weekend thinking that I failed. I was SO WORRIED. I needn’t be because I got the part. All that time wasted worrying. Of course every room is going to be different but it’s about taking charge and owning it. Don’t put casting directors on a pedestal; instead look at it as a collaboration. If there is a room you want to get into and you’re not find out why. Be proactive. Don’t Stress, Be prepared but don’t stress out about reading a line. Just read it and make interesting choices. Also, if you can become a reader – it will open your eyes to the process in ways you can’t imagine.

A: What has been your career highlight?

D: Of course Spartacus was a great part and seeing myself on a billboard on the freeway in LA was pretty incredible. When I got the role I actually didn’t know too much about it. It wasn’t till I actually went into my agents office and they were like “this might turn out to be a really good role for you.” Because it was for the rest of the season, and the character didn’t die – because there was always that fear of dying and then it got picked up for a second season – so I was like “oh my god!” But this industry is really about all the little moments. Lets call them the “yes” moments – all the little moments that just build up and keep you going. I don’t think it ever changes no matter where you are at in your career. You just have to keep on going and enjoy those “yes” moments. 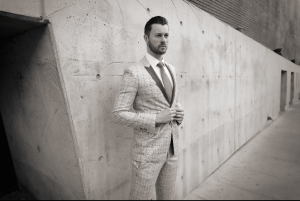 “Find your own formula that is adaptable, being adaptable is crucial…”

A: Whats the greatest piece of advice anyone has ever given you?

D: Keep going. Just keep on going. Have the confidence to ask for help, just ask for that favour. If someone knows someone who may be able to help you don’t be afraid to ask him or her to make that introduction for you. Be persistent. Persistence pays off. Publicity is also a very important part of the business these days. Its a necessary evil. Craft your social media to your liking and be humble enough to be approachable to fans. It’s also important to remember that there is no set formula in this industry. It’s not like becoming a lawyer at a top law firm for example. There is a formula for that – you go to law school and you work really hard and you land a job in a great firm. The acting industry has zero criteria. Everyone’s journey is unique and different. Find your own formula that is adaptable, being adaptable is crucial because the industry isn’t fair but if you work hard to be as good as you can be and you just let it go and trust then you can make it work for you. The thing is, people can give you all the advice in the world but it’s not till you actually experience the way this industry works will the advice sink in.

A: I like the idea of “keep going.” What keeps you going?

D: Aside from the “yes’ moments, it has to be all the gritty films. I love the type of films where an actor can really dig their teeth in. There is a film starring Sean Penn and Francis McDormand called This Must Be The Place and it really inspires me. Sean Penn plays this wealthy aging rock star who gets bored in his retirement and decides to find his fathers tormentor, a Nazi war criminal and hunt him down. The risks the actors take are phenomenal. This is the type of work I love and it’s these roles that inspire me and truly keep me going.

A: You are a man with a plan. What is the current plan for Dan?

D: To be available to work internationally. Right now I can legally work in the USA and Australian markets. However, I am in the midst of applying for my UK visa. My Grandfather was from the UK so I am able to get an ancestry visa. If you are able to get a visa to various countries then do it. I am so excited for this because so many great productions are made in the UK, it is a market I really admire. From my experience being a local hire is crucial as it will open doors for you. And, if it opens doors to those gritty roles then I’m going to keep on going!