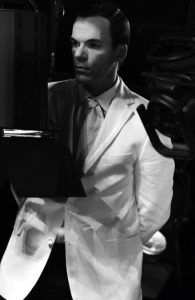 “The aim of art is to represent not the outward appearance of things, but their inward significance.” – Aristotle

It is only the beginning of 2017 and already humanity has witnessed both division and unity. We have watched the greatest super power of the free world change leadership, initiating a global movement, which has ignited the voices of the most influential people in the world. Their purpose alone empowers and motivates communities to develop ideas and engage in creativity.

The arts, much like civilization, is beautiful like that. With the stroke of imagination, the gift of a voice, and the power of character, we have the freedom to create work that echoes life’s gravities and the depths of the human soul. Things are never what they seem and the artist who benevolently portrays the boldest of parts with conviction is a powerful source.

Graduating from NIDA (National Institute of Dramatic Art) in 2000, Socratis Otto has become a household name amongst Australian audiences. With his striking features and smouldering curiosity he has birthed some of the most distinguished roles to date on the Australian Stage, TV, and Film arena.

The son of first generation Greek Immigrants, Otto—born and raised in Sydney—first came to our screens in 2002 with a lead role in the drama series Young Lions, as Justin Carmody. His next breakthrough role was as Charles Darwin in the three-part (one hour each) drama/documentary TV Series entitled, Darwin’s Brave New World, about Darwin’s evolution by means of natural selection. A Canadian/Australian production and filmed in Sydney, Australia, the series was nominated for a plethora of awards including the Gemini Awards, Leo Awards, and Logie Awards for most outstanding factual program and screened on the ABC and CBC to great critical acclaim in 2009.

What followed for Otto was an abundance of highly acclaimed TV and Film roles, including two years on Australia’s popular soap opera, Home and Away, playing Robert Robertson; the popular TV Series Rake; Paper Giants: Magazine Wars; Dance Academy; Carlotta; and, most recently, the award winning TV Series Wentworth, as Maxine Conway, transgender female inmate who, after undergoing rigorous gender reassignment, still looks conspicuously male. The series premiered on Foxtel with the highest ratings for a series premiere in the networks history and has gone on to win four Astra Awards, two Logie Awards, and three AACTA awards, including Best Drama Series in 2016.

His credits also include an extensive list of feature films including The Matrix Reloaded, The Rage in Placid Lake, Macbeth, X-Men Origins: Wolverine, and Gone.

Otto never fails to depict extraordinary characters with the utmost conviction. As an actor, his choices are brave and compelling, and as an artist, he continues to expose his audience to the depths of humanity. His work is ensured to be beautifully articulated and inspiring for many years to come.

1. Before you attended NIDA you completed a degree in creative writing and literature. How did both these experiences shape your work as an actor?

Firstly, Alix, thank you for the write up. It’s beautifully detailed and I’m touched by your lovely words.

I recall reading from such an early age, novels and poetry, song lyrics, biographies, geographic essays—plastering my walls with clippings, images, and pages from these books. I had my own four-walled library. It became a lab of sorts; I’d forever get lost in these works and the possibilities of creating the same one day, forever analysing and questioning how they both applied and didn’t apply to my experience growing up as a first generation Aussie kid.

Literature made me feel less alienated, less alone. I was able to identify with the characters I was reading about and follow their struggles in life, and create alternate pathways and “what if?” situations. All that labyrinthine thinking too often hurt the brain, but was so instrumental in helping me learn about myself and accept my many contradictory facets.

So yeh I took to Uni and studied the greats: Kafka; Dostoevsky; the Russians, Japanese, and American literates; Plath; Keats; the Pre-Raphaelites; Webster; Marlowe; Shakespeare; to the modern pioneers—Hubert Selby Junior, Alice Walker, Bret Easton Ellis, and Ben Okri. All revealed to me worlds that knew no bounds—characters that were not often or immediately celebrated and accepted, complex folk . . . the human propensity not replicated on my television screen.

I had no clue I’d pursue acting until in my early 20s, so yeh they prepared me incredibly, especially when I started to speak these words aloud and connect them to my body. I felt as though they were dear old friends and was ignited by the possibilities of reinterpreting them all over again.

2. With an impressive list of credits to your name, what advice can you give other actors who are looking for the same opportunities?

Oh wow. It’s such a lottery, Alix. Advice I don’t know; everyone’s road is remarkably unique. And these days it’s more bizarre to try and rationalise just how the industry operates.

I pursued roles that I hadn’t played before or wouldn’t necessarily be thought of to play primarily, by remaining as authentic to the material as possible. I tried to keep raising the bar, not ever wanting to repeat myself (not that we often get the luxury of such choice in choosing roles), but sought projects that would push me further and keep forming my craft, and in turn further teach me more about myself away from work/acting.

By constantly reminding myself that this life is so incredibly short, I ask myself what it is I wish to do and what roles and projects and people I wish to collaborate with—and perhaps in a way that’s manifesting goals, but really I’ve only ever tried to be true to the character before me, whilst attempting to focus on the present opportunity. All else has been, and is, a bonus. But, hey, don’t get me wrong—it requires an enormous amount of sacrifice, and more often than not the experiences are nowhere near as harmonious as hoped, but at the end of the day you measure things up and if acting is what you’re really keen on, you’ll find a way to get through and continue your individual path. 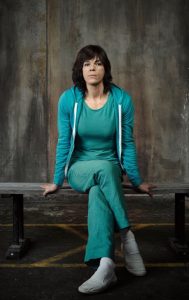 Otto as Maxine Conway on Wentworth

3. As an actor who and/or what inspires you to create such bold work?

Can I rattle off a list of people? So many. Erykah Badu. Sinéad O’Connor. Viola Davis. Serena Williams. Simon Von Booy. Ben Okri. Benjamin Clementine. All these souls who write and speak about the human temperament for all its beauty and ugliness. And they make no apology for their faults; they are scholars of truth. That’s inspiring to me because it rests on fearlessness and that’s what life should be about. And again, their voices help connect us to one another because we find familiarity in their music, words, characters, and feel less disenchanted and more hopeful about our future.

4. Your role as Maxine Conway on the incredible drama Wentworth was detailed and heartfelt. How did you prepare for this role?

I’ve always maintained that despite the difference in sexual organs, men and women breathe the same emotions and ultimately desire the same things. To be validated, to be seen. To be held in the world.

Preparing for Maxine, I knew the research would be continuous as trans-politics (at the time still rarely mentioned in the wider media) would always be developing and raise new ideas and science.

As a 40-year-old, recently transitioned MTF, it was fundamental I understood what that meant—the evidence to support her appearance, her body shape, her skin type, her vocal range . . . so I designed a lengthy back story detailing what hormone replacement therapy she took—when and how the different drugs affected her. Her psychological reports, when she started to live as a pre-op woman. Where and how the reassignment surgery occurred. The post-op period and what was required to maintain her new female organs. 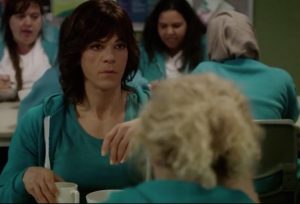 “As a 40-year-old, recently transitioned MTF, it was fundamental I understood what that meant.”

I watched a multitude of documentaries and read stories online, spoke with transwomen, had vocal coaching (no doubt driving people mad on set with my scales), grew my hair across seasons, and kept a healthy dialogue with both make up and wardrobe (unheralded saviours!) which was constantly evolving to reflect her body’s continuum in the taking of hormones.

Living with her across seasons, and despite each being vastly different to the previous in terms of her look and conflict, it was very easy and refreshing to seep into her. If we talk about being held, I felt protected by her, and many of the cast and crew (including extras) had a similar kinship to Maxine.

Fundamentally, minorities are not represented enough on our TV screens—the trans community especially—and to have helped break stereotypes and lessen any marginalisation, to reach those who were naive about what ‘trans’ meant, and to reach those who needed someone to connect to and feel a kinship with has been the biggest gift in playing this role.

5. What’s up next for Socratis Otto?

In March 2015 she launched her own company, Suspicious Woman Productions with the opening of John Patrick Shanleys “The Big Funk” in Sydney. Alixandra is also an accomplished Jazz and Cabaret Singer having performed in Sydney, Melbourne and NYC as well as the Australian Content Specialist, Writer and Editor for Casting Networks Australia.